June 27th, 2014
Grand Teton National Park, WY-What would you do if you encountered a bear? Is that an experience you’d hope for, or an experience you’d never wish on your worst enemy?
Chicago Tribune’s Stephanie Baer seemed to be quite fascinated with the thought of seeing a live bear in person as she shared her experience of hiking through bear country at Grand Teton National Park.
“While walking to the Signal Mountain Summit trail head that afternoon, I thought to myself how cool it would be to see a bear in the wild,” said Baer.
Baer seemed a bit optimistic about the thought of seeing a bear, even though she wasn’t equipped with bear spray or any other form of protection.
She came to the realization of the dangers she may face in the presence of a bear after reading a sign she passed by on the hike:
"BEAR ATTACK: Are you prepared to avoid one?"
During a surprise encounter — slowly back away
If a bear charges — stand your ground and use your bear spray
If the bear attacks during a surprise encounter — play dead
If the bear persistently stalks you, then attacks — fight back
If a bear attacks you in your tent — fight back
There is no guarantee of your safety in bear country”
If you encountered a bear, would you rather play dead, fight back, or stand your ground and use your bear spray?
Baer no longer felt so optimistic about a bear encounter. She realized her options were limited and the only reasonable suggestion from the sign was to invest in a can of bear spray.
“In a panic, we rushed back down the trail and dropped 60 bucks on a canister of bear spray (had we thought ahead and bought the spray outside of the park it probably would have cost half that).”
If you ever plan to be in bear country, it’s recommended you do not go without a can of Frontiersman Bear Attack Deterrent, sold at a reasonable price. 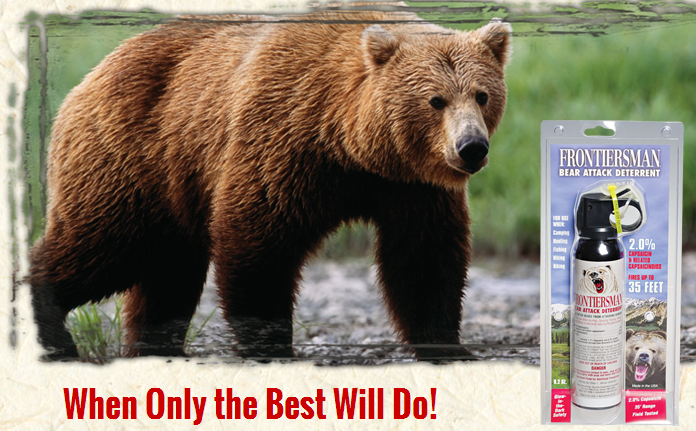 At 35 feet, Frontiersman 9.2 oz canisters fire up to 20 feet further than other bear sprays. This is a huge advantage considering charging bears can cover 30 feet per second!
Frontiersman was field tested and repeatedly proven effective at deterring charging bears by both Elmendorf Air Force Base and Brown Bear Resources.
For Frontiersman Bear Attack Deterrent and more bear-resistant tools, visit our website.

WARNING:
Don't be fooled by our competitors' misleading numbers! Get the facts on heat, strength and the law!
Make it safe, Stay Informed

Since 2008, SABRE’s pink product line has funded the equivalent of 14,000 mammograms.