Puerto Rico is an unincorporated territory of the United States with a population of approximately 3.5 million people. Most of the population lives in and around San Juan and the island is positioned in the northeast Caribbean to the east of Cuba, Haiti and the Dominican Republic.

The Puerto Rico Police (PRP) is the main and largest police department in Puerto Rico. Similar to a State Police Agency in the USA, the PRP was recently authorized by the Puerto Rico government to begin using pepper spray.

The Puerto Rico Police is organized into 13 regions within Puerto Rico for operational purposes.

The PRP was reorganized in terms of commanding officers and regional organization in 2009.

A new policy of the agency included getting involved in the community. Officers would sometimes patrol on foot in neighborhoods in an attempt to socialize with citizens, as well identify the problems that exist in the neighborhood.

Now Puerto Rico Police are searching for the most effective pepper spray to use when fighting crime in the area. They requested to evaluate 4 brands and of course, SABRE RED being the industry leader was one of them.

Two officers were sprayed with SABRE Red - one with Gel and the other Stream. Both officers said the experience was far more worse than what they had experienced in training prior from another brand. 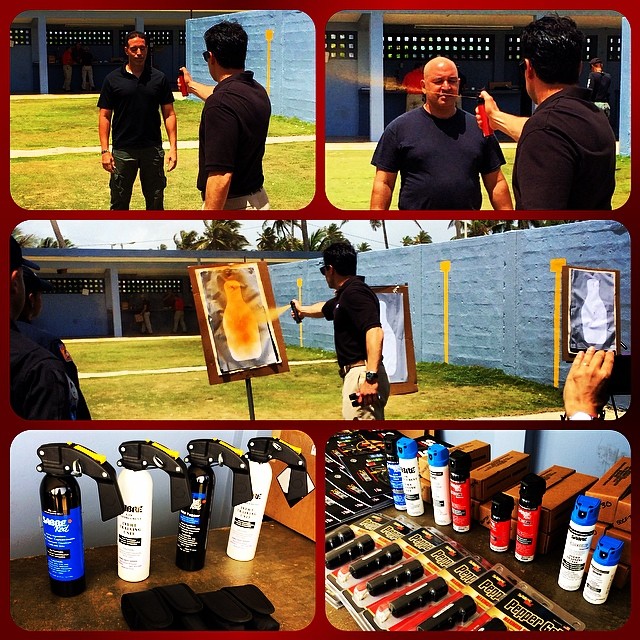 Upon this demonstration, the PRP chose to switch from the cone spray pattern to the stream spray pattern. This is because the stream has an increased 15 ‘ range, crossfire technology which allows them to deploy from any angle, and is wind-resistant, being useful against high winds in Puerto Rico.

The officers were very impressed with the effectiveness of SABRE Red along with the HPLC Laboratory, quality control system and extensive testing!

Stay tuned to see which brand they choose!